Peter Shire is an LA-based artist whose work eludes all attempts at categorization. He has created ceramics, furniture, toys, interior designs, and public sculptures, that seem to at once reference and parody influences such as Bauhaus, Futurism, Art Nouveau and Art Deco. This subversive humor and playfulness extend throughout his work and made him a natural fit for the controversial and iconic Milan-based Memphis design group, of which he was a founding member. A graduate of the famous Chouinard Art Institute in Los Angeles, Peter Shire has an impressive exhibition record. In addition to many group shows, his works have been exhibited in numerous solo shows, in his hometown, Los Angeles, nationally and internationally in Milan, Paris, Tokyo and Sapporo. Shire’s works are in many public collections and museums in the U.S. and abroad. Shire is represented by Kayne Griffin Corcoran. 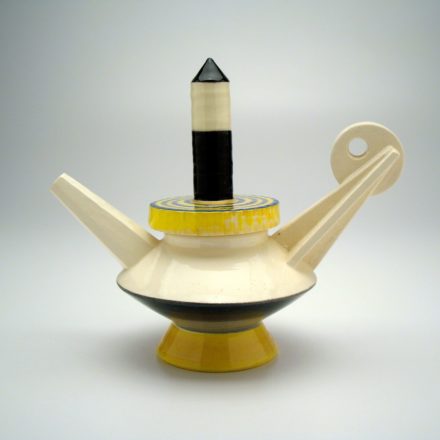