Laurence McGowan was born in Salisbury in 1942 and after an earlier career as a surveyor in various parts of the world he returned to his native Wilshire in 1979 to establish his own pottery workshop. He spent several years training, first with Pru Green at Alvingham, Lincolnshire, and later with Alan Caiger Smith at Aldermaston, Berkshire. Trained in the traditional majolica or tin-glaze technique of pottery painting McGowan now applies this knowlege to enhance his thrown stoneware shapes with ever changing brushwork patterns distilled from plant and animal forms. Whilst in no way imatative, these often contain echoes of his interest in the islamic decorative arts and their assimilation into the contemporary vocabulary through the arts and craft movement. Some pots are inscribed, exploring the extra dimension that calligraphy can give to a piece. McGowan's work is represented in many museums and private collections and is used and enjoyed in many houses throughout the world. He is a fellow of the Craft Potters Association, a retired tutor at the visual Islamic and Traditional Art Department of the Prince's School and was one of the featured craftsmen in the 'Handmade' series of films for schools, commissioned by Channel 4 Television. 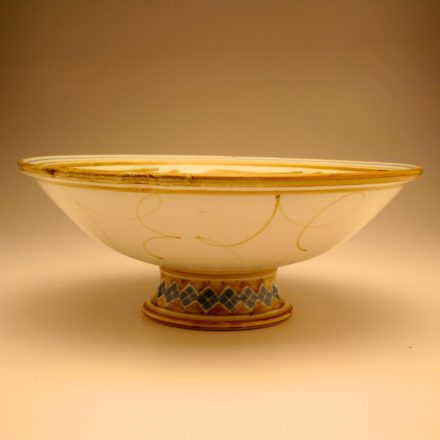