Ehren Tool has made and given away more than 22,000 cups since 2001. Tool has shown his work in the US and Europe. Tool’s work is in the collections of the Everson, Scripps and the Renwick as well as an unknown number of private collections. Tool served in the 1991 Gulf War and as a Marine Embassy Guard in Rome and Paris. Tool took advantage of the GI Bill studying at Pasadena City College transferred to the University of Southern California receiving his BFA in 2000. Tool Received his MFA from UC Berkeley in 2005. Tool has been the Senior Laboratory Mechanician for Ceramics since 2005. Tool was a recipient of a 2010 United States Artist Grant. Tool is interested in working with Veterans, their families and others who live with trauma. Tool has a three year contract with Vet Art Org to work with Vets creating cups and having conversations about war and healing. Tool received a United States Artist Fellowship in 2010. 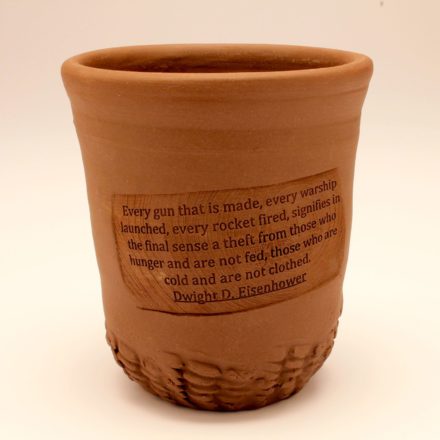